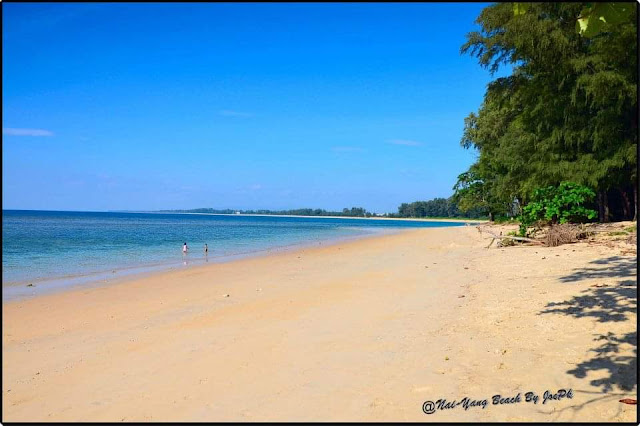 Welcome to Phuket, the Pearl of Andaman!
Although some recent geographical works refer to the sections of the Tenasserim Hills in the isthmus as the "Phuket Range", these names are not found in classical geographic sources.
Some 600,000 people reside on Phuket currently, among them migrants, international expats, Thais registered in other provinces, and locals. The registered population, however, includes only Thais who are registered in a 'tabien baan' or house registration book, which most are not, and the end of 2012 was 360,905 persons.

Seventy percent of Phuket's area is covered with mountains which stretch from north to south. The remaining 30 percent are plains in the central and eastern parts of the island. It has a total of 9 brooks and creeks, but does not have any major rivers.
Forest, rubber, and palm oil plantations cover 60 percent of the island. The west coast has several sandy beaches.

The most popular (and overcrowded) tourist area on Phuket is Patong Beach on the central west coast, perhaps owing to the easy access to its wide and long beach. Most of Phuket's nightlife and its shopping is in Patong, and the area has become increasingly developed.
In addition, the name Phuket is relatively recent having previously been named Jung Ceylon and Thalang.

The highest elevation of the island is usually regarded as Khao Mai Thao Sip Song (Twelve Canes), at 529 metres (1,736 ft) above sea level. However it has been reported by barometric pressure readings that there is an even higher elevation (with no apparent name), of 542 meters above sea level, in the Kamala hills behind Kathu waterfall. Its population was 249,446 in 2000, rising to 525,709 in the 2010 decennial census, the highest growth rate of all provinces nationwide at 7.4 percent annually.

The east coast beaches are more often muddy. Near the southernmost point is Laem Promthep ("Brahma's Cape"), a popular view point. In the mountainous north of the island is the Khao Phra Thaeo No-Hunting Area, protecting more than 20 km² of rainforest.
The three highest peaks of this reserve are the Khao Prathiu (384 metres (1,260 ft)), Khao Bang Pae 388 metres (1,273 ft), and Khao Phara 422 metres (1,385 ft). The Sirinat National Park on the northwest coast was established in 1981 to protect an area of 90 square kilometres (35 sq mi) (68 kilometres (42 mi) marine area), including the Nai Yang Beach where sea turtles lay their eggs.
Patong means "the forest filled with banana leaves" in Thai. South of Patong lie Karon Beach, Kata Beach, Kata Noi Beach, and around the southern tip of the island, Nai Harn Beach and Rawai. To the north of Patong are Kamala Beach, Surin Beach, and Bang Tao Beach. These areas are generally much less developed than Patong. To the southeast is Bon Island and to the south are several coral islands. The Similan Islands lie to the northwest, and the Phi Phi Islands which are part of Krabi province, to the southeast. 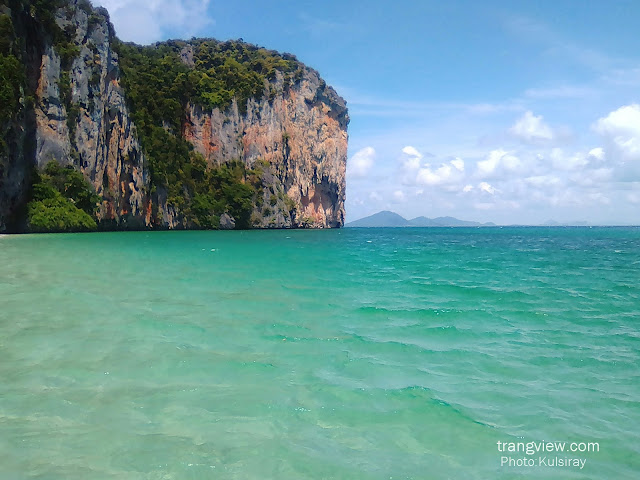 Krabi (Meaning the swords)
Krabi,a province on southern Thailand’s Andaman coast, is an almost otherworldly region of labyrinthine archipelagos, where islands seem to erupt vertically out of the sea and secluded beaches are only accessible by colorfully adorned long tail boats. Krabi’s myriad of bays and coves have sheltered pirates, merchants, and sea gypsies for thousands of years and archaeological evidence indicates that Krabi was originally inhabited as early as 25,000 - 35,000 years ago!

With attractions including hot springs, a wildlife sanctuary, sea caves, flourishing coral reefs and exotic marine life, limestone cliffs that draw rock climbing enthusiasts from around the world, and national parks that include the island paradises of Koh Phi Phi and Koh Lanta, one could easily spend weeks in Krabi and leave yearning for more.

If that wasn’t enough, Krabi features some of the most photogenic sunsets in Thailand, often accompanied by spectacular displays of cloud to cloud lightning, that are best enjoyed from a beachside bar or restaurant.

Meanwhile, with all the tourists spread out among various beaches and islands, life goes on in Krabi Town, the somewhat sleepy provincial capital. Surprisingly few tourists spend time in the charming riverside town, whose hilly streets feature a number of cozy cafes and inexpensive and authentic Thai cuisine is served at an outdoor, riverside evening market.

“Town” to most visitors is Ao Nang, a seaside strip of guesthouses, hotels, bars, restaurants, and souvenir shops that continues to grow as tourist arrivals increase, now spreading north into Noppharat Thara, whose quiet, shady beach is part of the national park that includes the Phi Phi Islands. Ao Nang is the major launching point for boat trips to nearby islands and the isolated beaches of Phra Nang Cape, where the famous former hippie enclave of Railey Beach is located.

Krabi Province, which lies along the coast of the Andaman sea in Southern Thailand, is a top tourist destination as a result of its plentiful natural attractions including, white sandy beaches, crystal clear water, extensive coral reefs, numerous caves and waterfalls, and over 130 islands, including Koh Lanta and the jewels of the Andaman coast, the six islands of Mu Koh Phi Phi National Park.
While not the top destination in and of itself, Krabi Town is a charming provincial capital located along the banks of a river that leads to the nearby Andaman Sea. Consequently, Krabi is an important port city for both local fisherman as well as boats ferrying visitors to the nearby attractions, including Koh Phi Phi, Koh Lanta, and Railey Beach, one of the premier rock climbing destinations in the world.

Phang Nga
Phang Nga province is blessed with a variety of outstanding natural attractions including the stunning Phang Nga Bay, the idyllic Surin and Similan Islands, the sandy coast of Khao Lak, and
Phang Nga is a province equally renowned for its beautiful land, spectacular bay, and amazing islands; Phang Nga national parks feature magnificent scenery with immensely different attractions. Most famous is Phang Nga Bay National Park, a geological wonder filled with islets, sunken caverns, and startling rock formations rising vertically out of the sea. The bay is extremely sheltered and therefore ideal for expeditions on sea kayak that explore the many fascinating caverns and islands throughout the bay.

Phang Nga's Andaman coast offers equally stunning national parks of a different kind; the island groups of Surin and Similan are renowned for their beautiful, unspoiled beaches and spectacular underwater scenery, attracting divers from around the world. On the Phang Nga mainland, Khao Lak features a coastal park full of rare birds, exotic mammals, and scenic waterfalls, as well as many luxury and budget hotels along the spectacular coast that was devastated by the 2004 Tsunami but has since been completely rebuilt.

Not to be confused with Koh Phangan, the island in the Gulf of Thailand, Phang Nga province lies on the Andaman coast on the Thai mainland immediately north of Phuket.
Phang Nga is renowned for its spectacular beauty, particularly Phang Nga bay, which contains hundreds of island including Koh Tapu (James Bond Island), where the film The Man with the Golden Gun was shot, and Koh Yao Noi and Koh Yao Yai, which feature laid back communities that allow for cultural home stay experiences.

Along Phang Nga’s Andaman seashore lies Khao Lak, a stunning coastline of expansive beaches that bore the brunt of the 2004 Tsunami but has greatly recovered, and -- these two islands are little visited, yet well worth the effort. Although part of Phang Nga province, they are best visited from either Phuket or Krabi provinces. The big attraction in the bay is the spectacular karst scenery that is found through out the north of the bay. 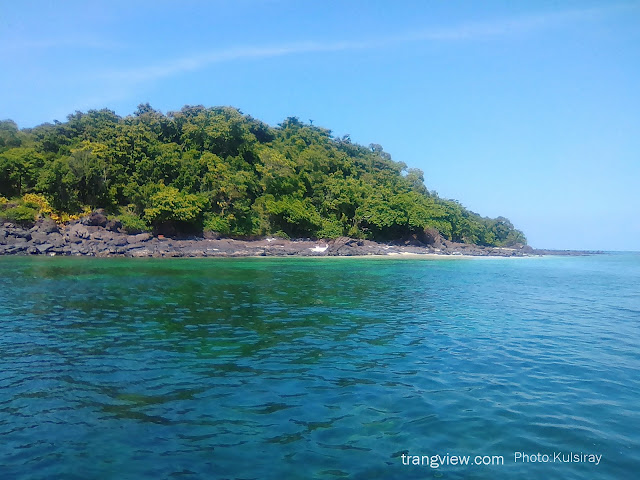 Trang is a magnificent coastal province with a long, beautiful shoreline that stretches 199 kilometers along the Andaman Sea. In addition, the province has two major rivers flowing through it, the Trang River, which originates in the Khao Luang Mountain Range, and Maenam Palian, which flows from the Banthat Mountain Range.

Despite the fact that Trang City plays a key role in facilitating trade to Nakhon Si Thammarat, Thailand's southern commercial hub, Trang is a province infrequently visited by tourists. It was only recently that Trang has been poised to establish itself on the international travel map.
Trang has geographical advantages similar to that of Krabi and Phang Nga. This includes breathtaking islands and beaches along the coast as well as awe-inspiring inland limestone mountains.

Trang has both mainland beaches and a whole string of offshore islands; the province features an archipelago in the Andaman Sea consisting of more than 46 islands. Visitors interested in light-adventure activities can cruise the coastal waters and visit notable sights, such as the enchanting Emerald Cave.

Additional attractions include the nearby Mu Koh Petra National Park, where idyllic beaches and islands are perfect places to enjoy the warm, clear waters of the Andaman Sea. Some of the dive sites in the National Park are world-class. There are also wildlife sanctuaries such as Namtok Khao Chong and Khlong Lamchan Park where waterfalls, nature trails, and caves are awaiting exploration. For those looking for a relaxed, tranquil ambience, Trang is a perfect place to unwind amidst stunning scenery.

Similar in topography to neighboring Krabi, Trang features idyllic islands with breathtaking karst formations and unspoiled beaches, making it the hot new destination for those looking for less developed yet beautiful Thai beaches and islands.

The waters off Trang have also become a refuge of the threatened dugong, the “sea cow” cousin of the manatee. Koh Libong is one of the best places to spot these docile sea mammals which have become the unofficial symbol of Trang.

Trang city, the provincial capital, is a centuries-old seaport with a multicultural population of Thai, Malay, and Hokkien Chinese residents, a mixture that is best appreciated while dining on the local cuisine or mingling with the locals at a local coffee shop.

Popular posts from this blog

Cheow Lan Lake or Rajjaprabha Dam Reservoir, is in Khao Sok National Park in Surat Thani Province, Thailand. It is an 185-square-kilometre (71 sq mi) artificial lake, inaugurated in 1987 with the construction of Rajjaprapha Dam by the Electricity Generating Authority of Thailand (EGAT) as a source of electricity.

Muay Thai is a martial art from Thailand with outstanding technical necking duel , which is both physically and mentally. For fighting, use the body as a weapon. It is known as the “weapon”, which consists of physical attacks on both fleas, elbows, knees and feet, if prepared for physical well.

Causing weapons of mass boxing has become prevalent internationally in the early twentieth century. When the Thai boxer could win a fight with a reputation in other fields , which competed in professional boxing.

The Real Fight Thai Boxing will be held @ Bangla Boxing Stadium Patong Beach Thailand . The Stadium is behind Jung-Ceylon Shopping Mall and opposite Baan Zaan Market.
You See Muay Thai. You See Thailand.


We are ready to transfers you there, please contact Andaways Taxi team at Andaways Private Transfers Service For city tours contact via : andaways@protonmail.com
Read more

Phuket FantaSea, winner of Thailand’s “Best Attraction Award, is a unique cultural theme park that promises to be the ultimate in night-time entertainment on the holiday resort island of Phuket.

Inspired by Thailand’s rich and exotic heritage, Phuket FantaSea not only showcases the charm and beauty of Thailand, but also enriches ancient Thai traditions with the wonder of cutting edge technology and special effects. The result is a stunning 140-acre theme complex, packed with a multitude of activities and entertainment

The Art and culture stage shows is popular in Phuket that you must see. Phuket Fantasea is located on Kamala, there are many show in Thai style with the professional actors in large area. The best entertainment that many tourist needs to see.